Shopping Cart
Your Cart is Empty
Quantity:
Subtotal
Taxes
Shipping
Total
There was an error with PayPalClick here to try again

Thank you for your business!You should be receiving an order confirmation from Paypal shortly.Exit Shopping Cart

Not as successful as Sydney Royal, but we were in Melbourne!!

It was a long drive down, Jess in the truck with Dad and Jen in the car with Mum. We left around 10 am and made it down there at about 7 pm ... that is after getting lost in Melbourne. Dad and Jess had a lovely trip around Melbourne in the truck, driving right next to the sky scrapers and just missing the trams.

Mum and Jen arrived at the show first, we started unpacking and getting everything organised. It was fairly late when we finally got all the gear and cattle unloaded. We set up our beds, had a shower and fell straight to sleep.

When we woke up it was absolutely freezing, we quickly got up, got dressed and went to tend to the cattle...not realising what time it was. Mum poked her head out of her locker and asked “what are you doing?”, we told her that “we were working”...she said “now, at 4:30 in the morning.”

Everything was pretty laid back. We had weighing and scanning on Tuesday morning. Flick weighed 662kg, EMA 101 and Fat was 5/4.

Daddy put us in charge of looking after their bull and heifer. The cattle all behaved and didn’t need too much attention. We helped Cookie with his cattle, considering the Coolah Central kids didn’t get there til late!

We didn’t go as well as we did at Sydney Royal but at least we got a place. Flick’s class had 15 in it, so his coming 7th was a really big achievement for us. We were really quite happy with our result considering Mum and Dad didn’t even get a ribbon. Flick got a nice purple ribbon. We both decided the judge, John Young had the coolest looking pants ever...he is Scottish so he had tartan pants on. They were so cool!

On Thursday Mum, Dad and Eric went to the Webb’s Black Simmentals open day, so we were in charge of the cattle. The parade of Simmentals was on so we prepared Flick and Mala-Daki Nickey. Flick decided to have a bit of fun in the arena, but Jess didn’t let go. One of the Coolah kids let go of his animal 2 or 3 times, he had fun running after his bull!

On Friday we all ventured out to the Pert genetics sale, it took us about an hour to get there, the weather had changed from being cold and miserable at the showground to being nice and sunny at the sale. The sale was good and with a free lunch you can’t go wrong!

We got invited to join the Coolah Central kids to do a heifer competition with them. Jen wasn’t allowed to be in the same group as Keith as she was a “distraction”. We washed the heifers, cleaned the halters and prepared them for the judging ring. It started raining while we were blowing so obviously that’s not good. We didn’t get a place but we had fun. 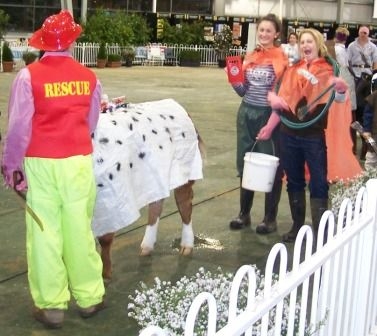 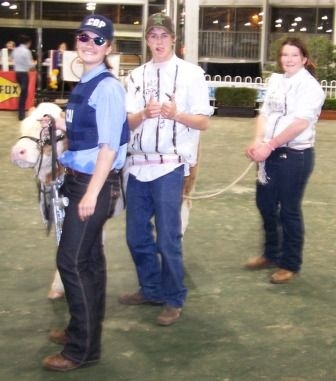 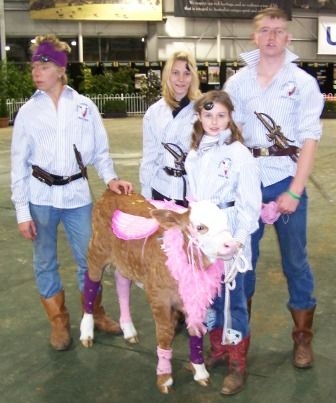 We hung out with the Coolah Central kids a lot. Keith made us go on the Pirates Revenge with him, where Jen was on the front and got quite wet and Jess on the back and stayed reasonably dry. We went on the Giant slide that was pretty boring. Then the last ride we went on was the Ferris wheel, Jess went on with Jake (who was really scared) and Saxon. They were trying to rock it to scare Jake. Jen went on with Keith. There are some really amazing views from the top of the Ferris wheel :)

Mum and Dad thought it would be nice if we went in to town and had a look around Melbourne. We caught the train in then walked around a whole heap then got on a tram. We had lunch at the Victorian markets and had a milkshake and ice creams. Then we walked some more and got back on the train and back to the show.